After doing the fashion round-up for Hollywood award season, I wanted to work on the desi version. The Filmfare awards for 2012 were last night, and it was a combination of sarees and gowns.

My favorite looks for the year: 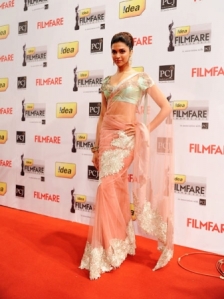 Deepika looked incredible in this stunning peach saree with light jewelry- bangles and earrings. I absolutely loved her hairstyle! 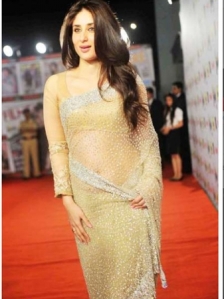 Karisma Kapoor looks ravishing in this white Manish Malhotra saree. I wish I could get her earrings and cuff!

Raveena’s look was another favorite for me, it was a simple saree but she accessorized it very well. The red saree and the gold blouse are an excellent combination.

Bipasha broke away from the saree gang, and looked like a goddess in a gold dress. I love her hairstyle, the hairband is adorable!

I went to watch Ra One yesterday, and the movie really disappointed me. The promos and marketing was so extensive, it was touted as one of the most expensive movies ever made in Bollywood. I went in with really high expectations. I appreciate the effort by Shah Rukh Khan to go beyond his typical role, and enter the realm of science fiction. But a huge problem with science fiction in Bollywood-too unreal and no plot!

Review: The first weakness of the movie is the lack of a strong story plot. As a nerdy Tamilian Shekhar Subramaniam, Shah Rukh Khan was utterly cringe worthy, reaching for every stereotype about Tamilians like eating noodles with curd using hands. I am sure the director assumed it would be funny, but such humor is really not funny. His wife Sonia, played by Kareena Kapoor is working on a thesis on re-coining swear words. The only adorable part of the first half, is their son Prateek, who is embarrassed by his father’s antics and dreams of his dad being a hero. In order to fulfill his son’s wishes, Shekhar designs a game with the ultimate super villian-Ra-One (Ravan) and a hero G-One who looks a lot like himself!  Its Artificial Intelligence meets Terminator, where the villain can change form and learn more moves. After Prateek beats Ra-One and has to leave the game mid-way, the blood thirsty villain follows him to finish the game. The movie’s second half is full of Matrix-style fight sequences, cat and mouse chases leading to the ultimate fight between good and evil.

Weaknesses:
I have always enjoyed watching Shah Rukh Khan movies, but this movie fails in so many places. I wasn’t a fan of Robot (which is remarkably similar), but the cameo by Rajnikanth as Chitti reminds you of how sci-fi movies should really be done.
NOT WORTH A WATCH!